THE OPEN AESTHETIC YOU WANT, THE PROTECTION YOU NEED 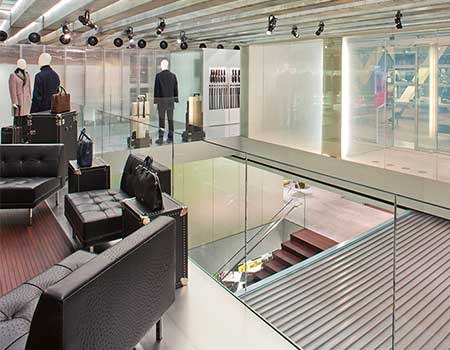 Historically, egress was not permitted through wide span opening protectives. In response, McKeon developed a way to incorporate egress doors into their fire and smoke rated opening protectives which allows the architect the freedom to design egress paths as needed. This greatly aids in the efficiency of the floorplan, allowing design items like monumental stairs to be protected with fire doors while also allowing the stair to act as a path of egress. Otherwise, a separate egress stair would need to be provided, adding cost to construction as well as taking up floor space.

PROTECTION IN ANY DIRECTION

Openings in a floor slab can be protected by their model H200 Horizontal Fire Door. Openings in vertical fire or smoke barriers can be protected by multiple side sliding, side acting, side coiling, and vertically acting models. Wherever you need a fire rated and/or smoke rated door to operate from, McKeon has likely created or can create a solution to protect the opening type.

McKeon Door Company has specifically innovated its product to solve protection needs created by fire and life safety code. They have achieved this by engineering a fire door for every opening, for every construction constraint, that closes from every direction. They are also able to incorporate multiple ADA complaint egress doors to allow the opening to be protected while remaining a path of egress.

UNCONVENTIONAL DESIGNS TO PROTECT EVERY OPENING

The International Building Code always prescribes multiple means and methods of protecting building occupants. Some have been used so frequently that they carry a perceived inevitability of being included in the design. However, the virtually unlimited ability for McKeon to protect openings creates major cost saving opportunities that range from eliminating smoke evacuation systems to changing the entire construction type of a building that may not have been apparent. 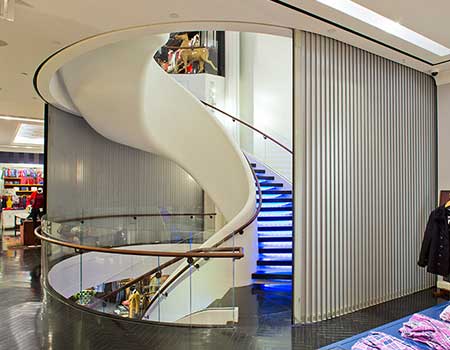 SOLUTIONS FOR SPACES BIG AND SMALL

McKeon’s wide choice of operation types also provides an opening protective per door storage location. If there is no overhead space to store a fire door coil, McKeon’s side acting products like the S4000 side coiling, S7000 side sliding, and the model AC8800 side acting accordion fire doors will work. If there are one or more radius curves around the opening, these side acting models can curve to protect the opening as well. Limited side room at each jamb of the opening can shift to vertically acting models like the T2000, T5000, FSFD, and CFS. Need to fit a tight narrow pocket? The side acting S7000 will work. Need to save on depth of the storage area but have available pocket width? The S4000 and AC8800 will fit this space.

McKeon can also engineer very large solutions that help to open up the maximum allowed square footage of fire and smoke barriers. The result is the largest allowable rated and protected opening, instead of being limited to other manufacturers’ maximum dimensions. Capabilities like these help protect the open aesthetic and design while meeting the prescribed requirements of the building code.

SSE is a licensed, insured and fully bondable FL WBE covering the Southeastern US.
Contact Us today for your pending project.